I looked at my eldest son. I observed his masculine jaw line, his curly hair and broad shoulders. It seems like a lifetime ago and yet I can still feel so vividly what I felt back then. Before I knew it, I got a knot in my stomach and a lump in my throat.

He was just a month old when he choked on his own mucus one day at the hospital. He turned purple, almost black, and I saw it happen right before my eyes. Somebody told me to go into a small room just down the hallway and sit down on a white plastic lawn chair with an orange flowery cushion to pump my breast milk. I’ve never felt so lonely. Then followed a nightly journey to the Intensive Care.

The first two years of his life were dramatic. He was suffocating, threw up everything, could not defecate and no longer felt pain. He went even lost consciousness a few times right there in my arms. And once we almost drove through the gates before the emergency room screaming with him as limp as a rag doll on my lap. The nurse compared him to a little frog in a pan with slowly warming water until boiling point. Eventually the little frog doesn’t feel the pain anymore and just stays there.

He did not eat, did not sleep, lost weight, stopped growing and got every possible virus. He dried off, coughed like an old man on the brink of death, and got a stoma. Those first two years, he went through nine surgical procedures and had been in hospital sixteen times.

I still see his baby face. His big brown eyes frightened for the umpteenth nasty intestinal examination or another scary syringe and his sweet smile after it had passed.

Or his surprised but pained expression when he had to learn to defecate again.  I still vividly remember it all.  The things that I had to do as his mother, on autopilot and without any emotion, come to mind. With a robotic nature I cleaned infusions, replaced his stoma bags and stuck catheters. If I had to hurt him, I hid my feelings and ignored my own emotions. I could not let all those feelings get to me; there was just too much that needed to be done and to cope with. But at night those feelings and emotions came back to me through incessant insomnia, and otherwise nightmares.

I still start crying when I think of his laughter in his little hospital bed as I read to him in funny voices, or when the hospital clowns came in to cheer him up.

We celebrated his first and second birthday in the hospital. His first steps he took on the shiny linoleum in the hallway. And he got his first tricycle in the game room on the tenth floor. We watched the terrible images of 9/11 together with surgeons, nurses and other parents in the waiting room. A tad alienated from the evil world outside the hospital walls, we looked at one another in disbelief and then sat down quickly again in the garden chairs next to the beds of our sick children.

At night we gave each other’s kids their pacifiers and pressed the emergency button if, over in the cot next to our bed, they were suffering too much.

It was our world, a world only parents with sick children know.

And so this story is for all those fathers and mothers who spend their days and nights in hospital rooms with brightly colored balloons, walls and drawings, listening to electronic squeaks, hearing little and big cries and all the alarming sounds you can think of, eating chicken soup, vanilla custards, and tasteless sandwiches for lunch and dinner.

All those intense experiences, emotions, and concerns define who you are. Fortunately, though my life will never be carefree anymore, those evanescent black visions and great fears do slowly fade away.

Yesterday I went with him to his dream school: Juilliard, the mecca of drama, music and dance in the middle of New York City. The energy, the passion and creativity radiated throughout the hallways and classrooms. Musicians, dancers, actors; they all filled this beautiful inspirational building. The Hollywood and Broadway artists of the future were sitting on benches reading their scripts. And he sucked it all up: the images, the sounds, the atmosphere. I saw him growing.

With tears in my eyes I looked at my maturing son as he walked amazed through the corridors of his dream school. My son with his own will, his own choices and his own development path. Letting go is the superlative of love, I thought. I looked at him with deep admiration and knew he will live forever intensely and with care. 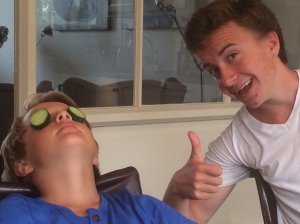